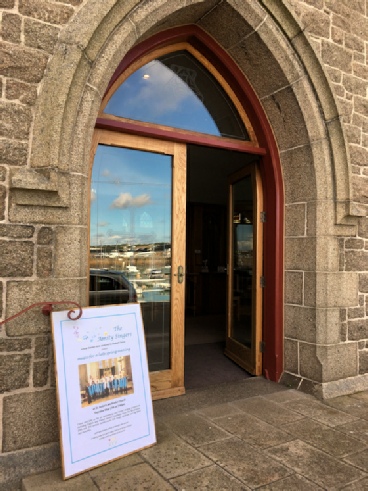 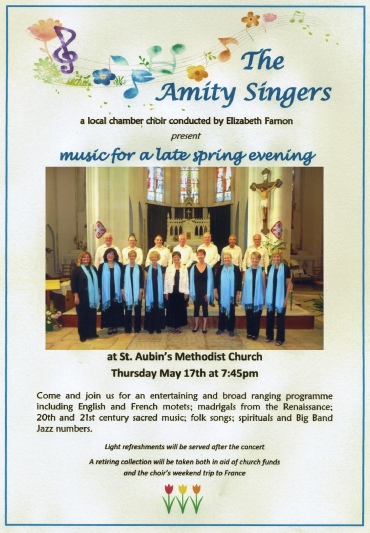 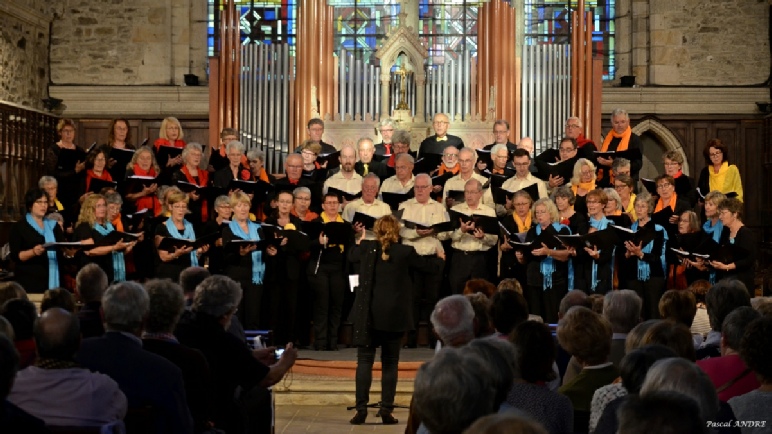 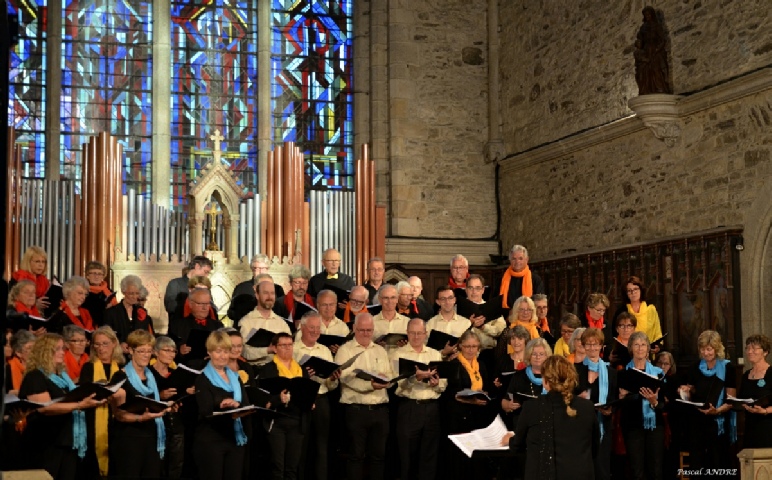 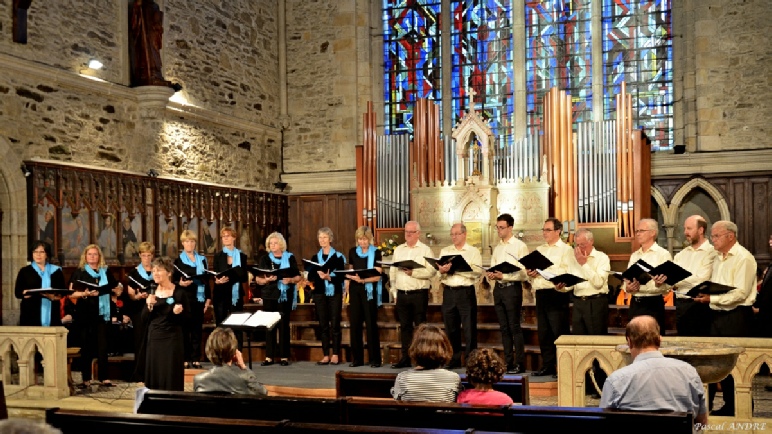 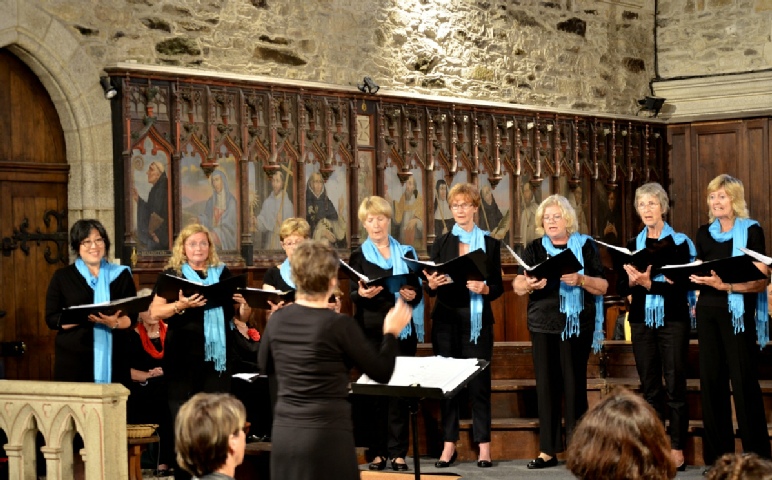 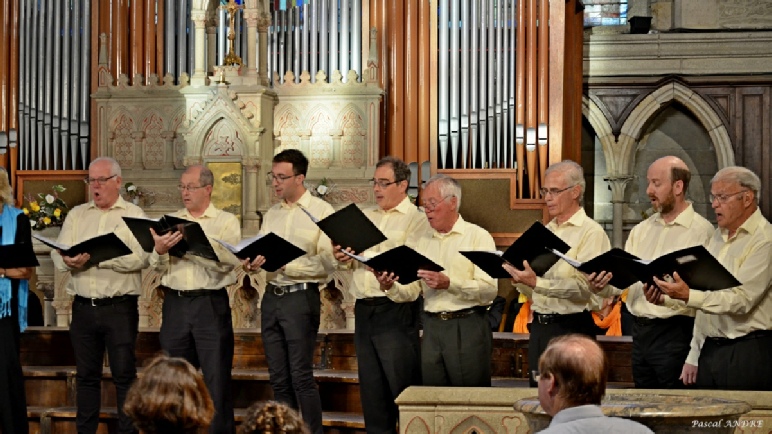 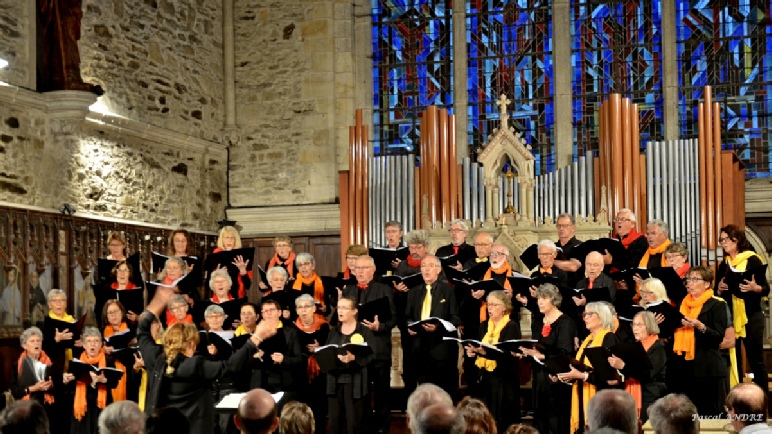 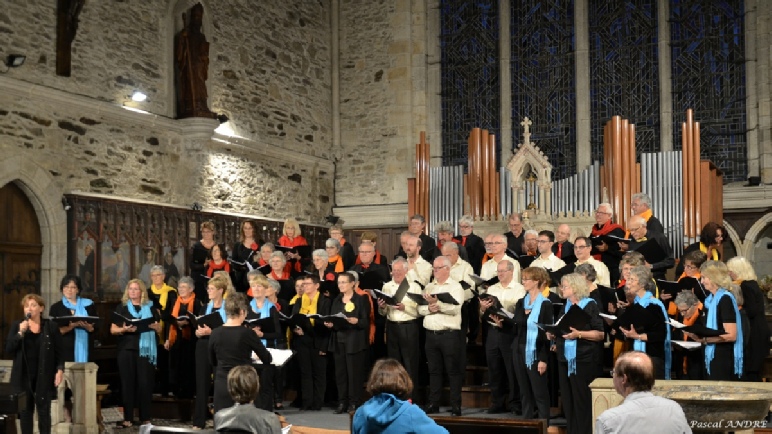 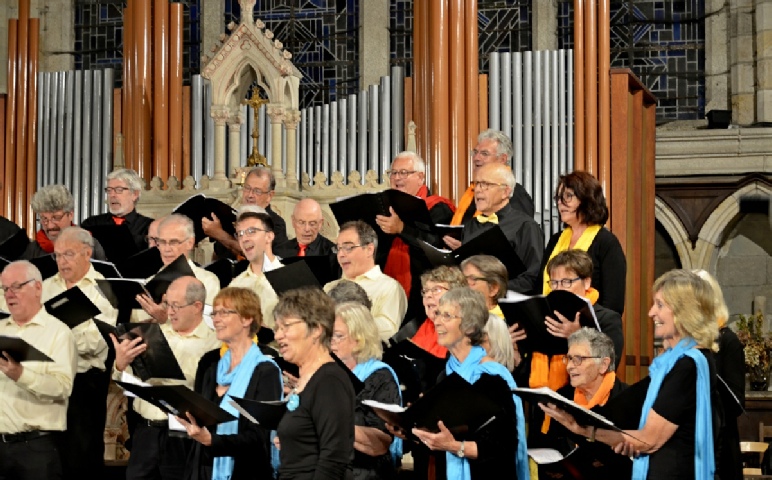 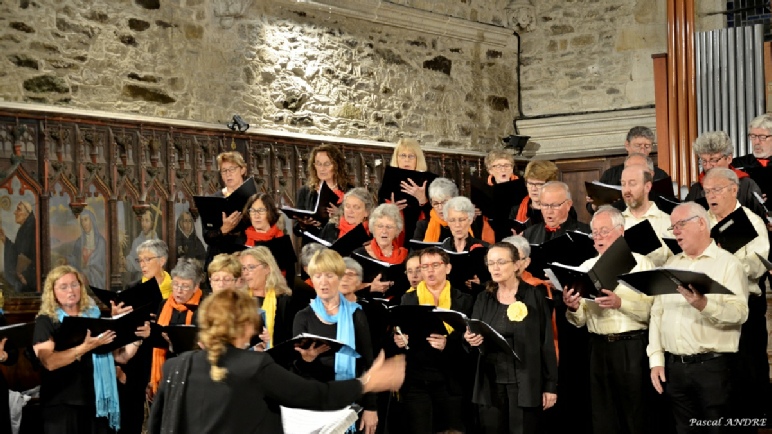 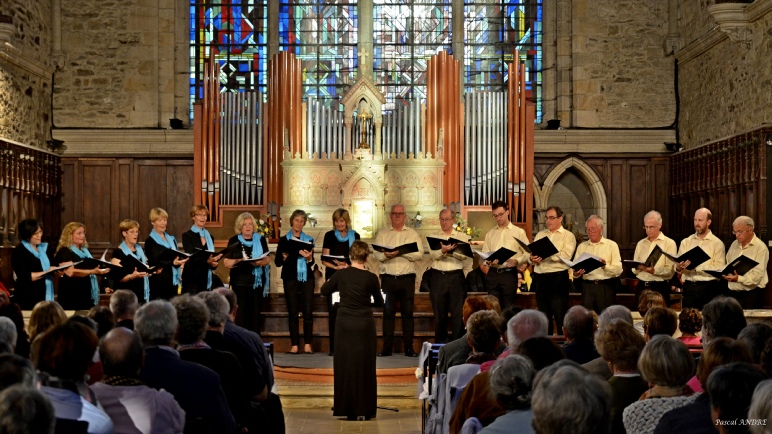 The choir sang in France at L’Abbaye de Léhon, near Dinan in Brittany with the concert starting at 2030 The concert poster can be downloaded here. We sang with a local choir, Musicalement Vôtre (MV) led by Béatrice Tronel with accompanist Peter Batley.

The programme for the first half was as follows;

After a short break, the evening concluded with; 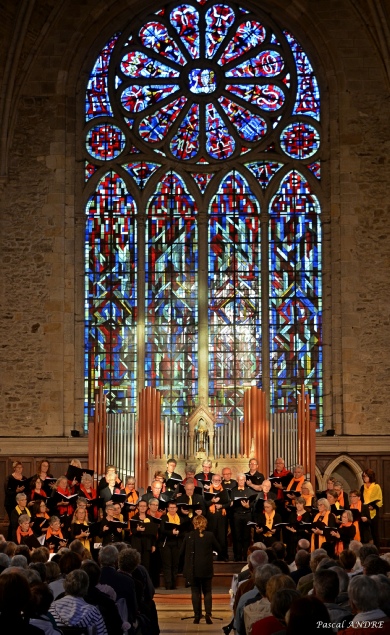 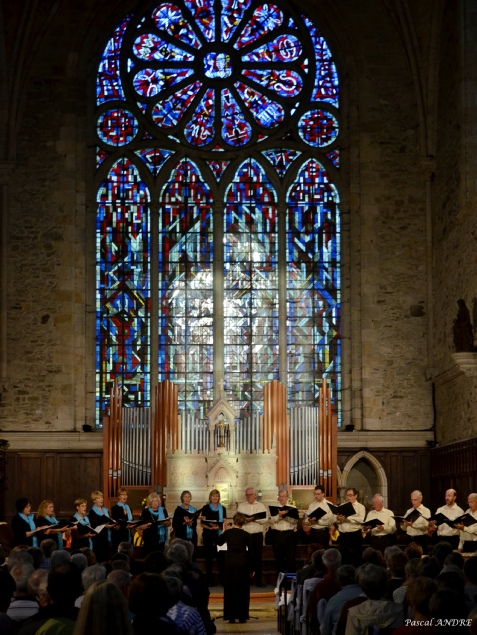 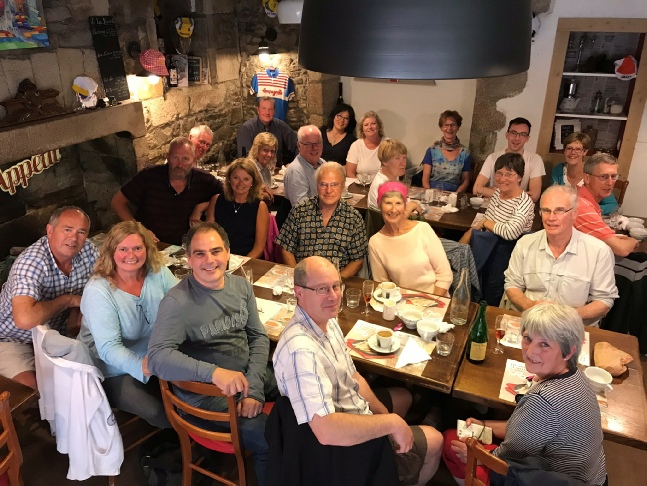 Amity is about friendship as well as good music and we enjoyed some very pleasant meals together over the weekend..

The Pallot Steam and Motor Museum was the venue for BBC Music Day 2018 when the choir sang for BBC Radio Jersey’s afternoon show presented by Connor Burgher. The theme for the day was “Platform to Perform” with choirs singing from railway station platforms and so Pallots was chosen in Jersey due to the splendid collection of railway memorabilia gathered over the years. Members of the choir were interviewed live by Lisa Da Silva and sang the following items associated with travel and movement (in the main!): Chatanooga Choo Choo, Ticket to Ride, Autumn Leaves, Blue Skies, Every Time We Say Goodbye, Lullaby of Birdland, Shenandoah, Somebody Talkin’ About Jesus and Tebe Poyem

We recorded Shenandoah and you can here it here 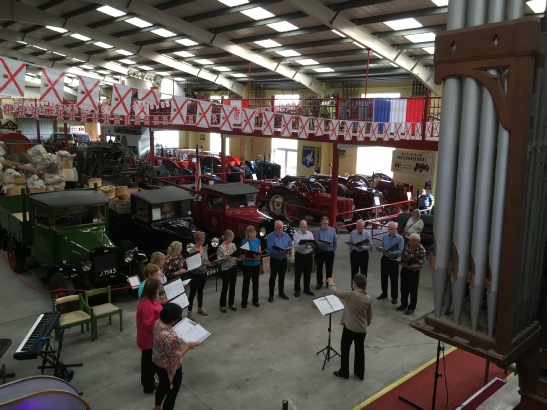 The group sang in the home church of one of our members in aid of the organ fund to pay for the recent replacement of the instrument that failed at the end of last year..

An image of the programme is here 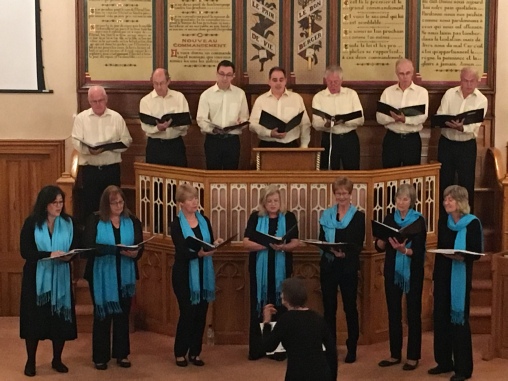 Amity entered the Eisteddfod once again in 2018 when we were awarded Gold for our performances in the Stanley Sackett Memorial Trophy and the Pauline de Ste Croix Cup. We were also awarded the cup for the latter class.

Our program for the latter class was Shenandoah (Bob Chilcott), Ticket to Ride (Lennon–McCartney Arr. J.Farnon) and Everytime we say ‘goodbye’ (Cole Porter)

In addition, Amity sang the in the composition class by performing Message by Duncan Miller who is a member of our tenor section. 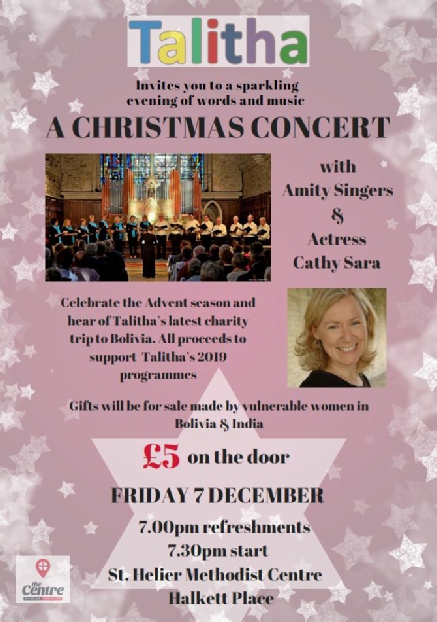 The 12 Days of Christmas

Our last two engagements of 2018 were a concert for Talitha and singing at Stuart Court Residential Home on Saturday 8th December.

Talitha are a charity who aim to “use the arts to restore hope and rebuild broken lives” and who are supported by a local group in Jersey who have recently visited Bolivia to put this into practice. The concert overall raised an impressive sum of over £1300 towards this valuable work.

Stuart Court are a residential home “…providing excellent, professional care within surroundings where, as far as possible, emphasis is placed on creating the feeling that this is their home rather than an institution”. Reacting to the engagement, one of our singers said “I think we love going there for their warm reception and lusty singing” so it was a happy end to our season.